I am gearing up for Clayathon 2020. I haven’t touched polymer in a while but started working with it again recently because I figured it would be good therapy for my hand and thumb.

I used to make a lot of canes and even wrote a little article on making geometric canes which you can read here.   There is so much better information on Youtube nowadays. But once you make the canes, you have to slice them. Below are two videos showing how to make inexpensive cane cutters. I made the first video (which I totally forgot about until someone saw it on YouTube this week and left a comment) to send to a friend to see if it was feasible to manufacture and sell an inexpensive cane cutter. Maybe it would have been, but the project never came to be. None of my ideas for the cane cutter, however,  are particularly brilliant. If you find anything that inspires you, please feel free to copy, share, or whatever.  I

A third low-cost option for a cane slicer is this one developed by Sherman Oberson and sold through Penn State Industries. Not very high tech, but it holds all shapes of canes steady for slicing and its small size makes it handy to throw into your toolbox. 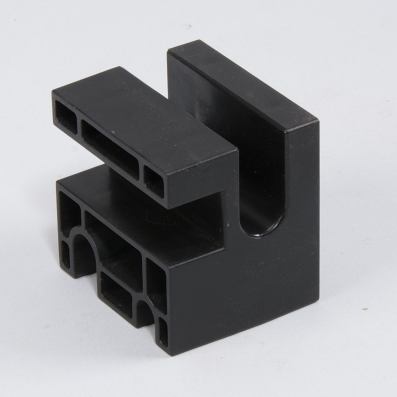 I had a great time at Clayathon this year. It’s wonderful to play with polymer with 130 of your closest friends, take classes with world class teachers, and relax in a four star hotel with a pool, fitness center and great restaurant. Organizer Arlene Groch has negotiated great rates which makes this an affordable week-long clay extravaganza. Here are some pictures. 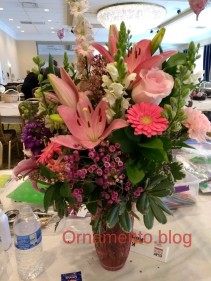 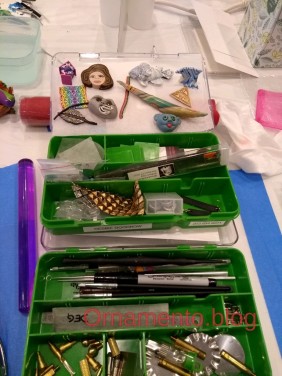 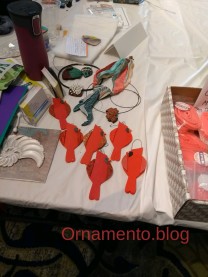 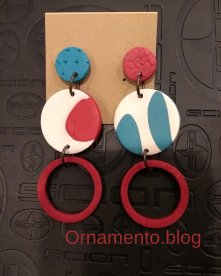 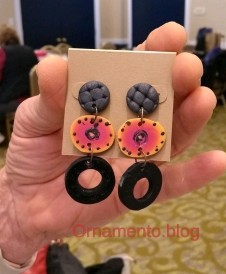 Polymer artist Lindly Haunani is currently in the hospital with multiple severe injuries she suffered in a car accident last week. She is going to have a very long, painful, expensive recovery.

Lindly was scheduled to teach a class at Clayathon which started yesterday.  Her friend and collaborator Maggie Maggio is flying in to teach Lindly’s class for her.

The Clayathon participants have planned some extra conference activities in support of Lindly.

Most importantly, Cynthia Tinapple has created a Go Fund Me page for Lindly here. Please support Lindly’s Page on your social media and email it to your contacts, and make a donation if you can.

I have pretty much exhausted my supply of ugly canes, but I think I have put them to good use. 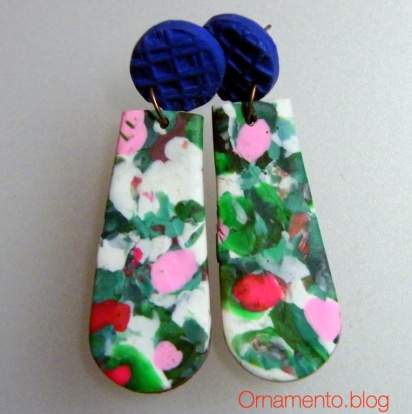 These earrings are what can happen when you chop up ugly canes in a mini chopper.  (I found one like this  at a thrift shop for $6.00) and add a few lumps of contrasting clay for interest. 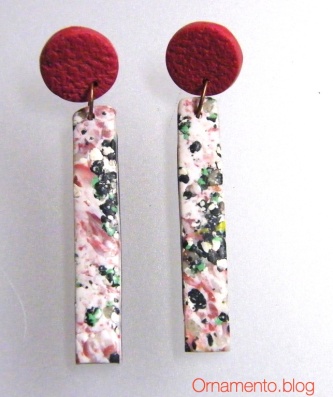 So I have all these components that I plan to take  with me to Clayathon to play around with and try new combinations for earrings.    I have also been experimenting with making my own clay cutters with this kit I got on Amazon.  I will post a tutorial and a review in the future. 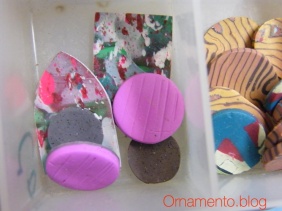 I’ll have a  lot to keep me busy!  Clayathon starts February 12 and goes until February 20.  A week of polymer bliss with Kathleen Dustin as this year’s guest artist.  It just doesn’t get any better than that.

Did someone say ugly canes?  How is working with this waste clay supposed to get me out of my creative slump?  I won’t say these are the ugliest canes in the world (at least they have some contrast.  Well,  of them anyway), but they do not thrill me.

I decided to slice and bake this time with the idea that I could turn out components that would look good in earrings.    I must say that I was partly inspired by these cutters I bought at Clayathon from Linda Prais of Linda’s Art Spot .

But cool cutters will not turn ugly canes into pretty ones:

Here’s an attempt to turn some of those less than perfect canes into earring components.  Not too successful, but I am learning.  “It’s like dating,” I tell myself. “You learn what you like by learning what you don’t like.”   Well, I am sure learning what I don’t like. 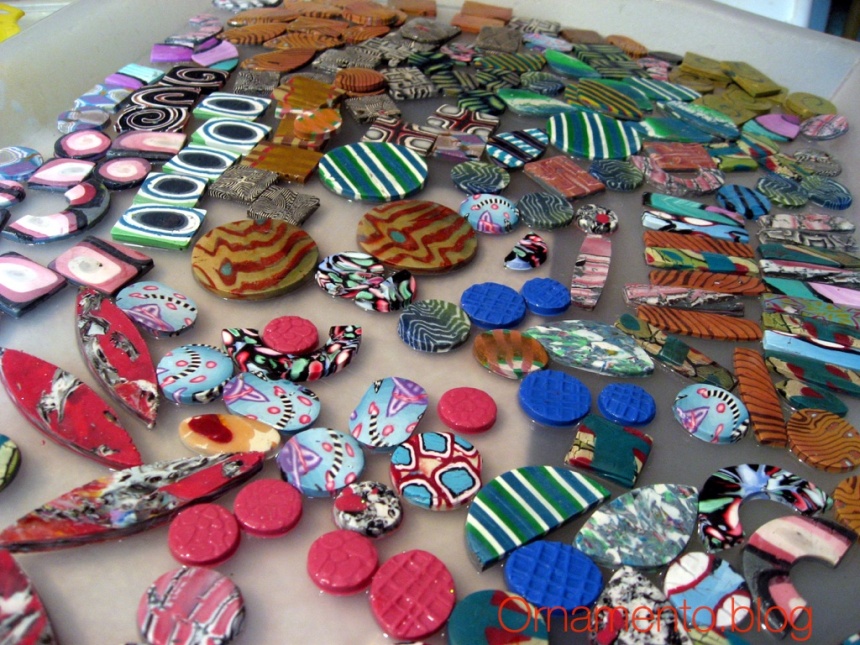 Aaugh!  Oodles and oodles of ugly components.  Most of them will go into the trash can.  But I am learning and I am even starting to be inspired.  More next week.

I must confess that I have been singularly uninspired these past few weeks.  This hardly ever happens to me.  I’m back in the pottery studio and even threw a few pots last week which is great considering that I had CMC joint reconstruction surgery in October.

I have amassed a collection of canes over the years that I haven’t used and that have become crumbly with age.  A few years ago, I played with a bunch of them to see what I could come up with.   Today,  I dug up a few of the components I made and they’re not bad.  I think I’ll take a few to Clayathon and see if I can combine them with wire work to make some necklaces.    In the meantime,  I am going to dig through my old canes to see if I can do anything with them.  More on that next week.

Anyway, here are some results from my first ugly cane experiment.  I made veneers by passing sliced canes through the pasta machine and laminating them on sheets of clay.  I kept rolling and laminating until I came up with something interesting.  I set some of the pieces in metal, mostly heavy-gauge copper wire which I squared in my rolling mill.   I limited my color palate, something I did not do with the ugly cane experiments you will see next week. Let’s see where these ugly canes take me. 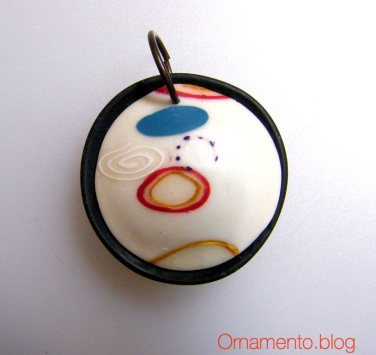 I made some pendants using jump rings to attach the lentil-shaped front component to a back component. While most lentil beads are attached at the edges, the parts of these swing freely. 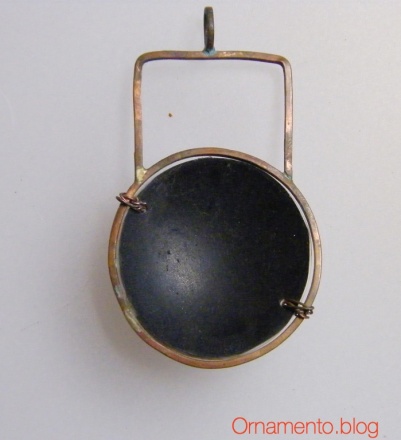 I attached the polymer piece to this pendant by drilling holes in the polymer and threading 30 gauge wire to wrap around the metal frame.

More examples of  uses for ugly canes next week.

Like Loading...
This week, I went with a friend to feed the cats who live in the feral cat colonies along the Delaware River in South Philadelphia.

Look at these incredible rainbows I saw yesterday in South Philadelphia. May they be a harbinger of the year to come.

Some pictures from around my neighborhood. 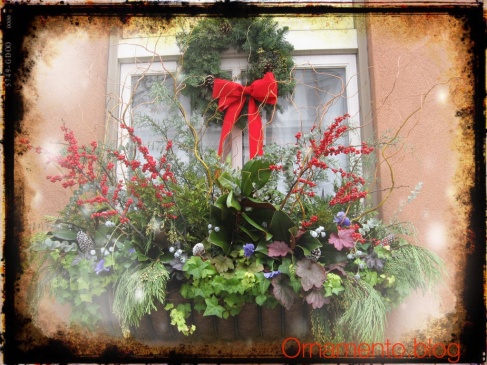 And back by popular demand, guest blogger Boris tells the story of how the Tabby got its “M”.

I wrote a few weeks ago about how my basement studio was in a state of upheaval due to the installation of New Gizmo in the back part of the basement.   Since New Gizmo replaced the  boiler and hot water heater,  does not use the chimney for ventilation,   I decided to move my kiln and polymer convection oven to the back basement and install a ventilation system using the chimney.  I already have a ventilation system in the front basement that I installed for soldering but which I found worked beautifully when I was cooking polymer and firing bronze clay.  Read more about that one here.

I still haven’t decided whether to install a downdraft vent for the kiln or to go with a hooded vent that I can use for the kiln and the convection oven.   I already made a plenum cup that fits into the kiln’s rolling stand  right under the kiln, but I have hesitated to drill the small hole in the bottom of the kiln that the downdraft vent would need to function.  If I made a downdraft vent for the kiln,  I would have to be able to detach it from the inline fan and connect separate ductwork to hood to ventilate while the convection oven is operating.      I think I am going to set up hooded vent first and see how it does before I make the final decision. 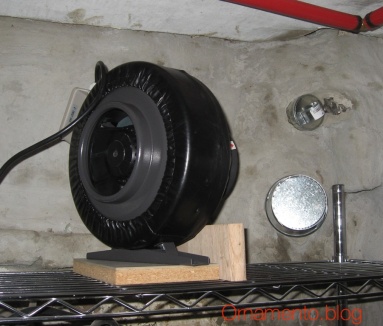 Here’s the inline fan I ordered from Amazon.  It’s the same one I have in the front basement.  It’s not too loud, has a variable speed controller, and does not require any special wiring.   I will have to bolt it to a piece of wood to steady it.   I could bolt it from the ceiling, too.    I will need two 4″ to 6″ vent reducer/increasers to connect each side of the fan to the ductwork.  I also ordered them from Amazon.   One will connect to ductwork that hooks into the  4″ chimney opening behind the fan and the other one will connect on the other side of the fan to a longer section of ductwork and the vent hood.

My electrician installed an extra outlet  for the fan and the convection oven.   The Paragon Max 119 kiln runs on 120 volts but does require some additional wiring and a special outlet which Stubewan the electrician also installed.   He also left me some metal tape and ductwork to use.  Thanks, Stu! 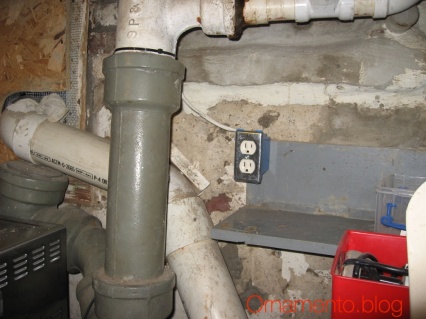 At this point, I plan to attach the ductwork and hood to the wood beams in my basement ceiling and raise and lower the hood with a chain. 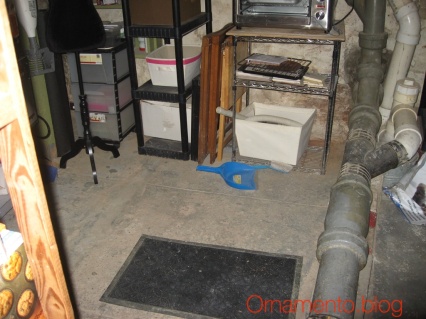 I plan to stow the kiln under the stairs and move it out to the middle of the floor for firing.   I was hoping to get it all hooked up this week, but Amazon sent the wrong size reducers.  Back they go and new ones ordered.