At The Expressive Hand in Bella Vista, you can paint your own pottery, create glass mosaics and learn American Sign Language.   And while  the studio, tucked into a charming old  storefront on the corner of Ninth and Bainbridge Streets,  is not new,  the owner is.  I first met Marcie Ziskind in college when we  we were  doing time in an off campus  program called The Harrisburg Urban Semester.   Years later, we ended up neighbors in South Philadelphia.  We managed to find time for artistic pursuits as we pursued our livelihoods  and tended our families (which, in Marcie’s case, includes three boys she once told me were training to be Vikings,  assorted cats, turtles, a rabbit, a dog and a husband.)  So I was thrilled and impressed (when does she sleep?) when Marcie mentioned to me one afternoon that she was buying the studio and closing the next day.

In the year that’s followed The Expressive Hand has become a community gathering place for crafters of all ages and it’s not hard to see why.  The  windows entice you inside with  intriguing displays of  ceramic keepsakes and gifts that you can make in the fully-equipped studio.  In addition to a huge assortment of bisque ware appropriate for every use, occasion and holiday,  The Expressive Hand has glazes in every imaginable color,  stamps, stencils, brushes, tools  and experienced staff to help you.  They also have two huge Skutt  kilns to fire your creations which you can pick up the next week.  If you need it sooner, they have a special “rush” service.  And you know what you’ll spend going in because one fee covers everything.  No airline pricing here. 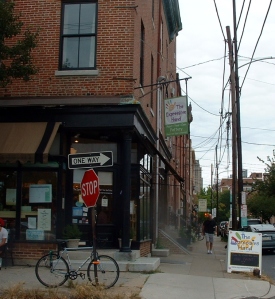 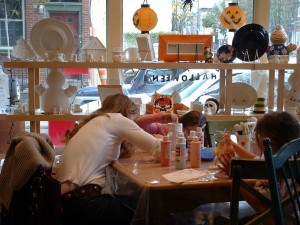 Marcie has plans to introduce other crafts to her customers.    Keep checking the Expressive Hand website for news.

1 reply to Express Yourself