What do these three things have in common?  Philadelphia artist Jim Brossy has his hand in all of them.

Crosstalk is a show on Philadelphia’s long-awaited public access channel.  It features Richard Boudreau sitting at one of the tables in front  of the Bean Exchange Coffee House  on Bainbridge Street  working on crossword puzzles.  What makes it interesting is that Richard is not above asking perfect strangers for help (in A thick Boston accent which stands out in Philadelphia), and engaging them in all sorts of humorous conversations.  And it doesn’t take much to get Richard to share a story from his past. (You should hear him tell about  the time  his mother, angry that his brother failed French in college, boarded the Professor’s  ship  as it was about to sail for Europe and kept the ship with all the passengers on board  in port until the Professor agreed to give Richard’s brother a passing grade.)

Crosstalk  airs on Philadelphia Access Television Comcast 66/966 & Verizon 29/30 Saturdays at 7:30 pm. Or you can watch it by clicking here and  selecting Crosstalk from the menu.

Crosstalk is the brainchild of Jim Brossy  who also  films and directs the show.  I think Jim is the only man who has ever been able to direct Richard  to do anything since Richard’s father  passed.  Jim is an excellent painter and belongs to the school (for all you art history majors)  of Crackpot Realism.  Jim appears  in this video:

Which brings me to  back to Stories.  Ken Baskin,(who I married in a weak moment some years ago) and David M. Boje co-edited a book of essays called Dance to the Music of Story.  The book examines the penchant we humans have for relating our  experiences in stories, through the lens of complexity theory.   The goal is to provide a different way to understand human behavior.  No, no, it’s not full of that touchy-feely stuff and,  while most of the essayists are academics, there are actually some interesting, concrete articles.  One is  Ken’s essay, “Gangsta Rap’s Narrative Context.”  If you think you understand Gangsta rap, think again.  It tells a story that most people would rather not hear.  But  Gangsta rap tells a story that’s entwined with the social and economic changes that drove it.  Understanding the story will give you a new way of looking at Gangsta rap.  No, it won’t make you feel warm and fuzzy and you still might not like it, but you will better understand it and you will probably have a lot more respect for it.
They say that every picture tells a story;  the book cover (below) certainly does.   It’s a painting  by Jim Brossy, called “No Dancing.” 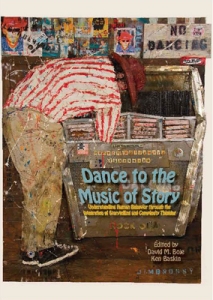