Click on the pictures below to see how I made them. Most of these cabs were fired a minimum of two times. I kept cutting, fusing and reassembling until I got a result I liked. Who knew you could stack ugly beads in a kiln and make something new? It goes without saying that all the glass must have the same COE if you want the fusing to be successful. And you have to get every last speck of bead release out of the holes. I mean all of it, because fused bead release is not pretty. On the other hand, if you fuse a cab and find that you didn’t clean out all the bead release, you can grind or cut or it away and try fusing the glass again.

Bottom half a bead on left, whole bead on right 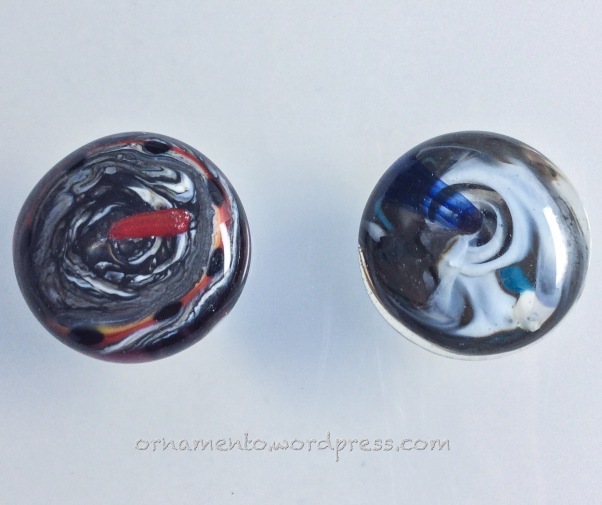 These were encased beads with stringers inserted in holes before fusing

Orange bead fused inside a big holed ugly gray bead. I added dichroic and some clear glass in the later fusings

Half of a bead fused with scraps

Two flower beads. One split in half and fused with the second bead and dichroic glass in the middle.

Here’s the Fusing Schedule I used.  Yes, you can fuse with Moretti glass!  And here are some ideas for using lampworked bead scraps in fusing projects

My fancy camera set up