This is the latest post in the saga of my explorations into quilt making. I have the tops done, one of the quilts quilted with the filling and the backing and am working on the second one. As a matter of fact, I spent most of Sunday afternoon making the second quilt “sandwich.” I’m using an old fleece blanket for the filling and a flannel sheet for the backing. Honestly, I have read that you never use a sheet for the backing and that you never use flannel so I had to try both. I have also combined many different types of fabric in my quilt. The only thing they have in common is that they survived a ride in my washing machine on the brutal cycle.

The term “brutal cycle” brings back memories. My brother swore my mother had one on her machine because she was the kind of woman who did not believe in dry cleaning and liked to play washing machine roulette with our clothes. Some of them did not survive the brutal cycle.

Another project I have been working on for quite a while is taking my old LP records and making MP3 files from them. What a trip down memory lane that has been! (When I was fourteen, one of my favorite pastimes was listing to a Joni Mitchell album and crying into a cup of tea.) My musical taste is pretty eclectic but when I was a kid I had a fascination with folk music. I got John and Alan Lomax‘s American Ballads and Folk Songs out of the library over and over. I read and reread  The American Song Bag. I learned how to play the guitar. After getting some recordings by The Carter Family out of the library, I managed to talk my parents into letting me get an autoharp.  Don’t ask me how that happened.

But I lived in a place where we had limited access to any kind of music or art and this was in the days before the Internet. I even had to go to another town to go to the library and that took an Act of Congress to get my parents’ permission.

So it wasn’t until I was in college in Boston that I first heard Woody Guthrie’s Library of Congress recordings. Three LPs of music and interviews. The first time I heard it it was like I had stepped through a portal and into another world.

On Sunday I pulled out the box set, plugged the MP3 making turntable into the computer and listened to the six sides again as I worked on the quilt. It seemed fitting since quilts are supposed to be a peculiarly American item and Woody Guthrie is considered a peculiarly American folk singer.

I was more familiar with the things Woody talked and sang about than I was when I first heard the recording at age 18. For one thing, I had transcribed extensive interviews of an Uncle who rode the rails during the Depression. I knew more about the way banks operate. I had a deeper understanding of my family history of that time. Of course, human nature never really changes but we get better tools which is how you are reading this blog post. 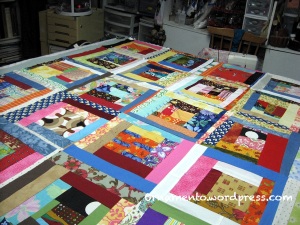 Quilts have been described things that tell stories and that are full of memories. I think this is true even if you buy all of your fabric new. I don’t have many old clothes in my quilt that I wore, but there are some of my Mother’s place mats and napkins in there. As a matter of fact, even though the fabric came from a combination of thrift shop clothes, remnant bags, fabric samples and cut up bed clothes, dumpster dives and old tablecloths, when I look at the quilt top I feel like I have a relationship with every piece of fabric: I can tell you where it came from and how I got it.

And I have used my Mother’s and Mother-in-Law’s sewing machines to make the quilts.

I even remember the day I bought those flannel sheets way back before I was married.

So now Woody is all transferred to MP3 files and I will give the box set to a friend who still cherishes vinyl.

And every time I look at the quilts now, I will think of Woody because he has become part of the quilt’s memory.