This has been a frustrating week.  Pictures have disappeared from my hard drive.  MS Word has chosen to save parts of documents and not others.   I spent time circling the gas pumps trying to figure out how to get the fuel tank on the rental car to the correct side to pump gas. And what do you call it when you’re about to finish sewing something, prick your finger with the needle, and bleed on the fabric?  (It’s  a good thing I know the cold water dab don’t rub trick.)   At this point, I  could write a book entitled  Tips and Tricks for Idiots.  And to top it off, I have to start brushing Boris’s teeth.  Oh, the humanity.

Which brings me to the matter of the vent.  My studio is in my basement and I would like to be able to solder and  make glass beads in the winter time.  But the ventilation is not so good with all the windows shut.  So I decided to get me some ventilation.  I first asked my plumber who was doing some work on my house and he proposed something that was expensive and more like the kind of ventilation you would need in a dairy barn with 500 lactating cows. Except that I love my plumber (how many of you can say that?)  And maybe it was my fault. Maybe I asked for too much. I have a habit of doing that to men.   Just ask my husband. Or my plumber.

Plan B-YouTube.  Mymy there are a lot of YouTubers out there growing vegetables. And flowers.  In tents,  There is a lot of information on how to ventilate your <cough, cough> crops.  If you don’t like gardening,  jeweler Nancy Hamilton has a good tute on how to set up a fume extractor  system for jewelry soldering here.  There are also a lot of instructive images on that famous time sucker, Pinterest. Very few how-tos, though.   I didn’t know how to connect duct work or how to install an in-line fan. But when has a lack of knowledge ever stopped me?  I got married,  didn’t I?

Here’s what I did.  But first, allow me to vent.  Will you look at this window? It’s 14 X 6. Whoever heard of a window like that except in South Philly? It’s probably the only one in the world.  I needed to cut something to fit said window, and then cut a 4 inch circle out of that to put the dryer hose through. I grabbed an old plastic  storage container, cut it to size,  made the hole,  got a vent collar at Home Depot and I had my hole to the outside. 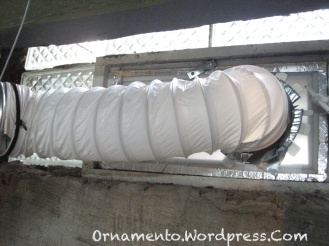 I needed an inline fan with a speed controller that was not too noisy.    I ordered this    from Amazon waited two weeks for it and then they cancelled my order and gave the option to reorder.  Wha?  I asked them, how about you give me free overnight delivery and I order it again.  They said yes and it came the next day.

Now, I don’t know the numbskull who designs these things, but there was no room for a drill or screwdriver to allow me to attach it to the wall.  So I had to brace a couple of stud scraps, run the screws through backwards, fasten the stud to the wall and   fasten the fan to the stud with nuts.  Nuts I to that say.

While I am venting,  I learned that the adjustable clamps are next to useless for attaching duct reducers to the fan or ducks to ducts.  Or ducts to ducks or ducts to ducts.  But I learned (through thorough research those indoor gardeners know everything!) about self tapping machine screws.  Except mine would not self tap.  They were probably worried about going blind.  Do you even get that joke?  I ended up making the holes for them and all was well.

The speed controller which is also the on-off switch  is off to the side. 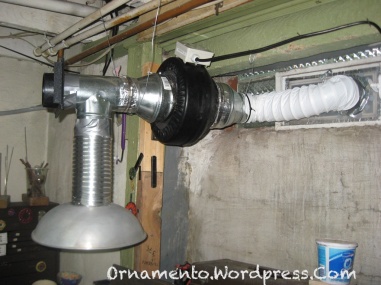 Here is the completed venting system.  I put a blast gate on the other side of the T duct because I might want to extend the system.  I then have to put another blast gate on the bottom of the T duct to close it off.  That project comes under the heading of maybe later or maybe never.  My favorite part of the system is the hood with is a trash-picked wok cover that I cut a hole in.  I got the rest of the stuff from Amazon and Home Depot. 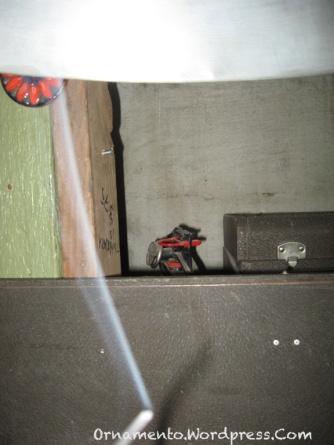