I’ve wanted to tour the Masonic Temple in Philadelphia for quite some time.  Even though there have been Masons in my and my husband’s family and  I used to work in City Hall which is right across the street, I never made the trip.

Then I joined the Cityscape Tours Philadelphia Meetup group that Steve Rosenbach organized a year ago.  When an email popped up in my account announcing an “Almost Free” tour of the Temple I signed up and I’m glad I did.

I arrived at the Temple a few minutes early and Steve was there with a list of names and a hearty welcome.  He was very well organized.  As more people arrived, it became evident that some had attended prior tours Steve had organized and that others were newbies like me.  But everyone was very friendly and the fact that we all had cameras seemed to unite us somehow.  I always feel self conscious when I take pictures in public (you’d never know this I suppose because I take pictures constantly wherever I go if it is legal and does not violate privacy,  propriety or rules of etiquette.)

By way of background, the Masonic Temple was constructed between 1868 and 1873 in the Romanesque style of architecture developed by the Normans in the Middle Ages. The interior took another 15 years to complete and included  It is on the list of National Landmarks.

There are seven lodge halls in the Temple and our group got to see four of them: Ionic Hall, Norman Hall, Egyptian Hall and Gothic Hall.  We also saw the Grand Staircase,  some fascinating artifacts in the attached museum, and some very old portraits of prominent Masons including George Washington. I took a lot of pictures but most of them did not turn out so well.  No matter; it was a fun and interesting time and good company.  To learn more about Freemasonry, press here.

Here are some pictures 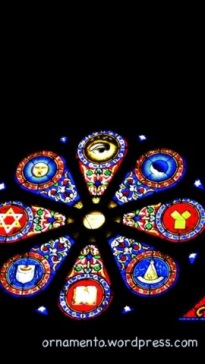 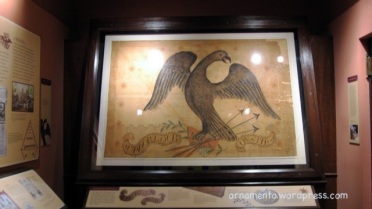 I just found this interesting image cica 1840 of the site where the Masonic Temple now stands. Part of the Arch Street Church, which was later enlarged and is still standing, is visible.