I learned how to make hollow stacked beads and hollow pod-shaped beads.

I learned that hollow pod-shaped beads were only a starting point and that I could take the clay wherever I wanted it to go.

I learned how to assess whether a given paint would work with polymer clay.

I learned that Claire is an incredibly generous teacher who prepares illustrated handouts bursting with information, ideas, resources and more.

I learned why Pan Pastels look so ##@&^#$@ gorgeous on polymer and I discovered that I need to buy them in all my favorite colors.  Like right now.  Or sooner.

I learned different techniques to crackle, seal, antique, enhance, texture,  carve, wax, paint, emboss, finish and (whatever else you can think of) polymer clay.

I learned about some new software that just might change my life. (Ok, that’s an exaggeration but Repper is pretty cool.)

If I have to  stop to think about whether I really want to leave my clay to go for Chinese food with Sherman Oberson, you know that it had to be a great class.  Here are some pictures of  what I made.   The ideas keep coming. Thank you Claire Maunsell for a great class!

Who remembers discovering polymer for the first time and maybe running out and scoring a copy of  The New Clay?     The Philadelphia Area Polymer Clay Guild was lucky enough to have The New Clay author and polymer innovator Nan Roche at a recent meeting where she recalled her introduction to polymer and how she came to write a classic work on polymer techniques and art.

In the 1980’s Nan  was a hand weaver and had a studio at the Torpedo Factory in Alexandria, VA.     Someone, Nan didn’t recall who, came back from New York city with with a fascinating necklace from the Julie: Artisan Gallery in Manhattan.   The necklace made from an material that no one could identify until a ceramic artist named Kathleen Dustin, who also had a studio at the Torpedo Factory, recognized the material as Fimo.  Dustin remembered Fimo from when she had lived abroad and said that it was marketed to children as an art material.  But the necklace was no toy; it was extraordinary. People wanted to know about the material it was made from.   Information on products like Fimo was hard to get in the days before the Internet, but Dustin did some research and was able to find a US supplier for a similar material called Sculpey.  (Fimo was not sold in the US at this time) She ordered some and started to experiment with it using a millefiore caning technique familiar to glass artists.

People saw Dustin’s work and wanted learn how to use this new art medium.  So, Dustin scheduled a class at the Torpedo Factory and 60 people showed up to take it.  One of them was Nan Roche who described the excitement in the class like  buzz on the floor of Filene’s Basement on a Saturday Morning.

Nan would later recall the class  in the foreward she wrote to  Sarajane Helm’s Create a Polymer Clay Impression,

“As I was being shown how to make my own millefiore designs by Kathleen Dustin, in a fateful class at the Torpedo Factory Art Center, the connections were exploding in my head.  I don’t think I slept for several days after that class.  I was so excited!”

The interesting thing about this was at the time, different people  around the country were discovering  polymer and working with it independently.  You can read an excellent account this  in Kathleen Dustin’s articles on  the Polymer Art Archive.

“I went to work at my dining room table  and thank God my area rug didn’t get too damaged, Nan recalled,  “I was so excited that I would wake up my husband to show him what I’d made.”

So I would bring in things that I had worked on in my dining room and people would say, “My God I wanna learn it!” I started teaching classes in my dining room.” Textile artist Helene Bress took a workshop.    Her husband Seymour was just in the process of starting a publishing business  and asked me to write the book. ”  Nan said she resisted initially because she had a full time job and was raising a family, but then  decided  she was ready to leave the world of textile art and weaving behind.  After she agreed to write the book, she spent the next year and a half working  all day, coming home and writing all night.  She  wrote  the kind of book that that she would like to read,  and that’s why  The New Clay explains what polymer is  in such detail and then and then outlines the myriad ways of using it.  Before The New Clay was published,  there were no other materials in English on polymer clay.

And so, The New Clay was born.  You already know the rest of the story.

Here are some other pictures from the meeting.

Some pictures  from the May 17  meeting of the year of the Philadelphia Area Polymer Guild.

Eugena’s web site has links to her gallery where you can ooh and aah over her delightful creations.  You can also purchase tutorials for  many of the polymer clay techniques she has developed.

Eugena is constantly working to improve her tutorials so it’s well worth it to follow her blog.  On May 19, she announced that she had made improvements to the procedures to make Openwork bracelets and pendants.  Best of all, those who have already purchased these tutorials can get the updates at no extra charge.  Click  here for more information.

I spent most of Clayathon playing, trying out new bead ideas and posting images on the Philly Guild’s Blog and Flickr site. But I did finish a few things.

And Terri gave me these cool bracelets that jangled on my wrist for the whole Clayathon. Thanks!!!!

Go to to the PAPCG Flickr site Here. Read the posts on the PAPCG Blog The Guild Reporter, Here.

Since WordPress is not cooperating with me today, here are the links:
http://papcg.org 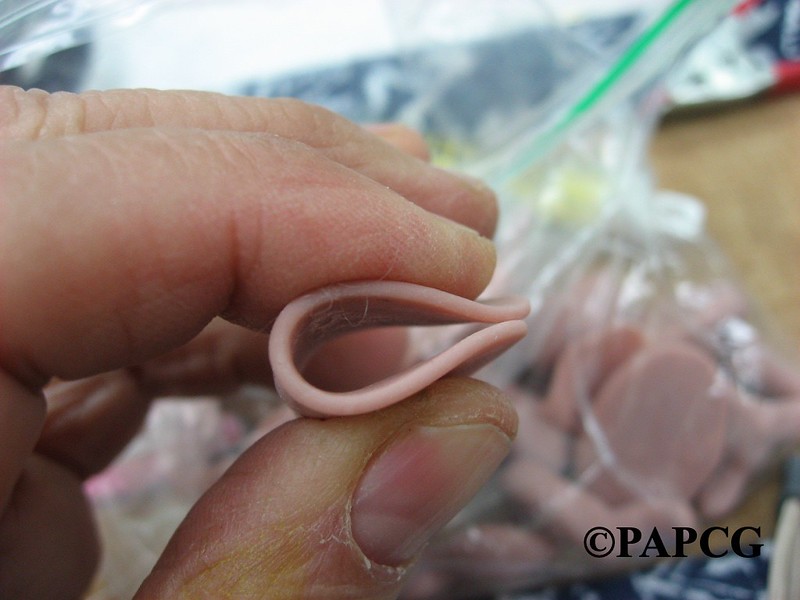 I finished the birdie ornaments and decided to put them on swinging perches because they are swinging birds. In fact, their first stop after they left the workshop was a party where Mr. Green found a home on a Christmas tree

I managed to catch the birdies in candid shots before they flew off to their new homes.  They are made of polymer clay with  newspaper and foil armatures,  I painted them with liquid clay stained with alcohol inks-a technique I’d never tried until I saw Kate Clawson‘s work and attended the class she gave for the Philadelphia Area Polymer Clay Guild

I managed to catch the birdies in candid shots before they flew off to their new homes.  They are made of polymer clay with  newspaper and foil armatures,  I painted them with liquid clay stained with alcohol inks-a technique I’d never tried until I saw Kate Clawson‘s work and attended the class she gave for the Philadelphia Area Polymer Clay Guild

The birdies chat before they depart for their new homes.

I made these polymer clay beads earlier this year after Clayathon.    I limited my palate to black, white, red, turquoise, a bit of gold,  and  used lots of translucent.

Now that the Philadelphia Area Polymer Clay Guild has hosted Bonnie Bishoff,  I am ready to put the glass away for the year and get out the clay again.  I wonder what I’ll come up with this time?

That’s where I plan to be this weekend. Here are some pictures from past Clayathons.

Earlier this summer I got to spend some time in Arlene Groch’s spanking new studio which I wrote about a couple of weeks ago.

Here’s what she’s been up to.

And no one ever accused Arlene of being afraid of color.  Her pieces are big, bold and colorful.

Recently, Arlene has gotten into caning.    Well, I suppose a workshop with Bonnie Bishoff and Melanie West   and hanging around fellow PAPCG member and caner extraordinaire  Emily Squires Levine is bound to rub off.   It will be interesting to see where Arlene goes from here.

The August 11 reveal date  for  group 2 of Lori Anderson’s  6th Bead Soup Blog Party has passed.  I was blown away by all of the outstanding work I saw as I hopped from blog to blog.  Lori put together the map below to show where  all 400 blog party participants live.  There are  more detailed breakdowns on her blog.

I don’t think my beads and clasp were the easiest to work with.   Kristen’s jewelry seems more delicate than a lot of  mine and the clasp I sent  was pretty big.  And I could never figure out what to do with those minty vintage curved bugle beads.   Kristen found a way to integrate her crystals and smaller beads  with mine and  made a a very attractive set of earrings and a bracelet that anyone would be pleased to wear.

On another topic, the Philadelphia Polymer Clay Guild (of which I am a member) has started a YouTube channel and we intend to fill it with playlists of high quality tutorials with videos we make ourselves.

So, here is the interview with Jana Roberts Benzon.

And finally, it’s the most wonderful time of the year.  That’s right: It’s Beadfest Philadelphia time.  Don’t miss it.

I made a beaded bead, two birdies and started a mad scientist figurine.  I was not productive at all.  But I don’t care.  Leslie Blackford was our guest artist and she gave some wonderful demos on sculpting  and making figurines with heads that screwed on and off so you could change them depending on your mood.   Leslie’s work is engaging, memorable, clever, funny, punk, outre, and wonderfully screwy all at once.   She is a patient, generous teacher and down to earth.    We all had a blast.   I bought one of her necklaces (a pizza eating cat) and  part of the clasp bore the words, “Damn everything but the circus!”  I looked up the e.e. cummings poem which seems to describe Leslie’s approach to polymer clay.  I think it’s also a good way to live:

Damn everything but the circus!

…damn everything that is grim, dull,

damn everything that won’t get into the

its heart into the tension, surprise, fear

and delight of the circus, the round

I saw old friends, made new ones and took a cold walk on the Atlantic City Boardwalk to Caesars Casino with Leslie,  Rob Yost  (who came up from Maryland wearing his skunk hat) and Barb.  Emily and Lisa were preternaturally prolific as always.   People sculpted some incredible things and I took scads of pictures.  I  hope to post most of them in the fullness of time.

Here are my birds

To see everyone else’s birds, go to to the Philadelphia Area Polymer Clay Guild’s blog, the Guild Reporter