Last week’s post on the Philadelphia Fashion District referenced the Streetsdept.com blog which chronicles street art in Philadelphia.  I love street art because it’s free for the viewing,  usually relevant to current events, or a chronicle of  past events that need to be memorialized.  People have been drawing and writing on public walls since ancient times.  Street art can be viewed as a crime or high art.   I prefer to think of it as  public art.

Lisbon in Portugal has a lively and vibrant street art scene as I discovered on a  trip there earlier this year.  Here are some highlights:

The Fox covers the side of a building and is made up of junk and recycled materials. 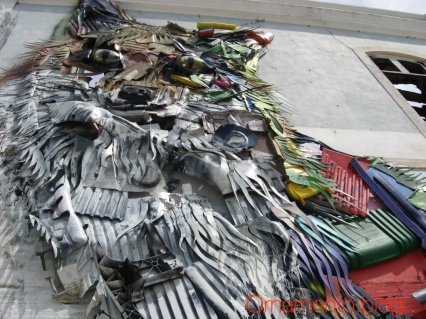 The Alfama District is home to some great street art including a mural dedicated to Fado singer Maria Severa Onofriana.

Here’s one of my favorite Lisbon murals.  It’s called “Respect” and is also in the Alfama District.  Apparently there is a whole cadre of senior street and graffiti artists in Lisbon.  We were told that this mural depicts one of them reacting when a younger colleague does not show her the respect to which she is entitled.  Read more about the older artists here.  Read the real story behind the Respect mural here. 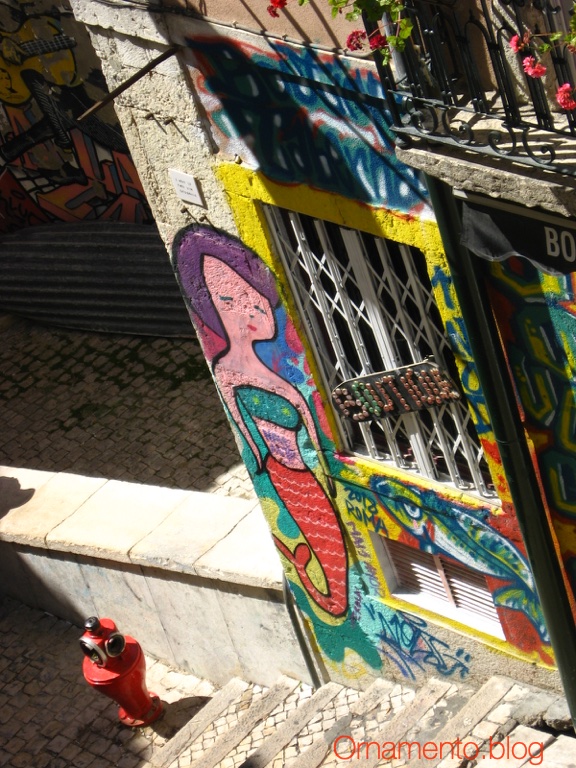 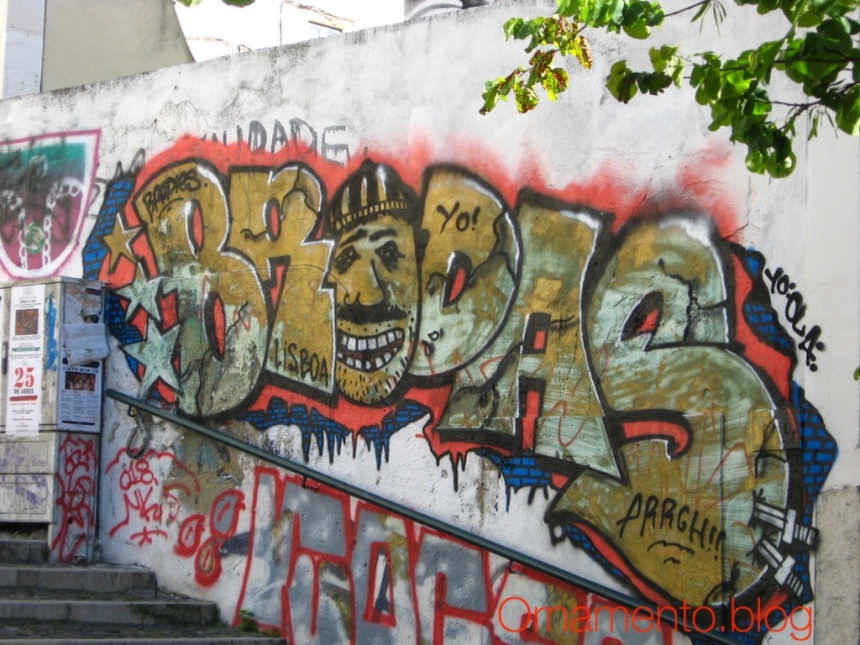 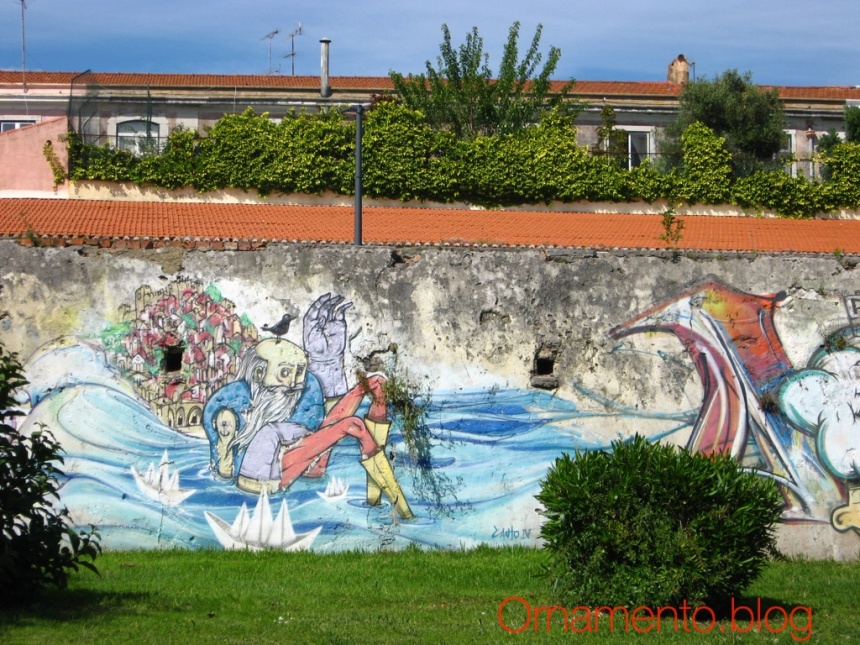 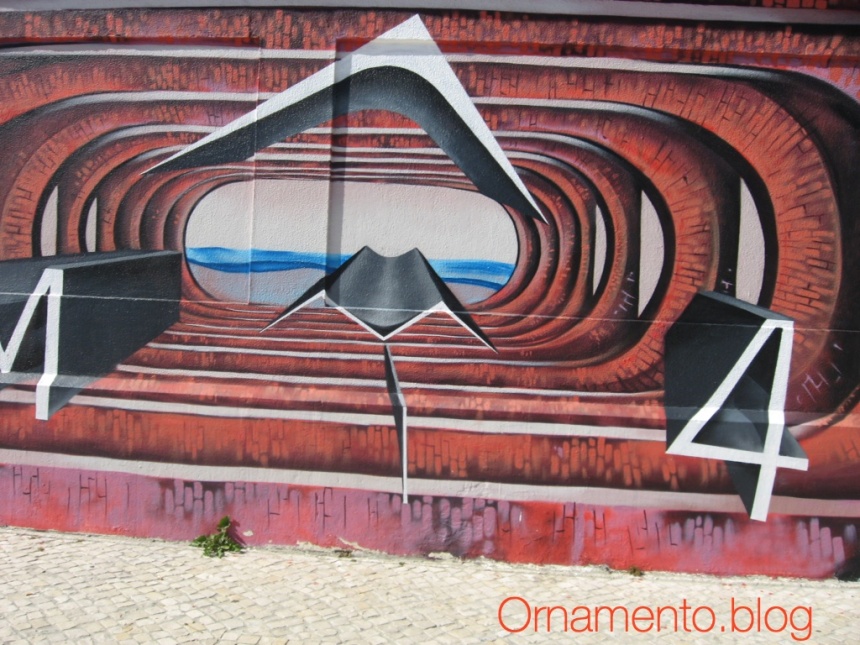 If you want to learn more about Lisbon street art, the Camels and Chocolate  blog is a good place to start.  Better yet, go to Lisbon and walk the streets.

I’ve always known that I was a late bloomer.  I’d heard of Ana Belchi but never knew about her videos and free downloads until I subscribed to Studio Mojo.

I haven’t watched all Ana’s videos yet, but I’m working  on it.  I was delighted to learn that she also offers  some free templates on her web site for the projects she demonstrates in the videos.

Fiona Abel-Smith also has an incredible video where she demonstrates how to construct a 6-sided polymer box and how to cover it with a geometric cane pattern that she explains in great detail.  She has a number of other fascinating looking videos that are on my must watch list.

On another note, I recently came back from a trip to Spain and  Portugal and my head is swimming with all the beautiful tiles I saw in both countries.  I’ll post more on that later.

You never know when a stuffed animal will make you a new friend. Our traveling companion Le Mutt broke the ice when my husband and I dove into a Nepalese Restaurant near our Lisbon hotel seeking respite from the many fish and potato meals we had in Portugal (where the people are lovely but the food not so much.  This is a contentious subject.)   If you are ever in Lisbon, drop by Himchuli

This is not the first time Le Mutt has  made friends in a foreign land.

Everyone gets into the act in Seville during Easter week. #travelphotography #travel #sevillespain #easterweek #easter

A train and two buses later, and we arrive in Granada on Easter Sunday. With Beethoven’s Ninth on the radio how bad can it be? This is the view from my window. Not bad at all. #granadaspain #travel #travelphotography #eastersunday #beethovensninth

Driving in Granada looks like it's quite a challenge! These two trucks barely had room to make it down the street without upsetting people enjoying their lunch. #travelphotography #travel #granada ##granadaspain #travelphotooftheday

This week was quite a week.  I drove up to Boston to pick up a friend and her dog Benji to bring them to Philadelphia for a visit.   Benji is a Yorkshire Terrier who has a thing for stealing glasses and chasing cats.

Benji the terror and cat chaser

Boris spent the week in the basement with his toys and food.  An attempted meeting betwen Benji and Boris was a disaster.  Only then did we learn that Benji is a cat chaser.

I got lost in the Big Dig tunnel in Boston after I dropped Benji and his human companion back at their apartment.  So I got a tour of downtown Boston which has changed immensely since Benji’s human companion and I were students at Emerson College.

We were able to get together with a third friend from Emerson before I drove back.   We were so young when we first met.  Now we are grandmothers.

Boris has reclaimed his house now that Benji the cat chaser is gone.

My husband is a silly man who often claims, when I ask him a question, that I am “grilling him like a salmon.”  But he is a good sport.  After all, he married me, didn’t he?  So when we were in Pittsburgh last year for the opening of Into The Forest, he agreed when I told him I needed to make a stop at the Construction Junction. He even opened the door for me!

The Construction Junction is a nonprofit used and surplus building material retailer.  It accepts all kinds of donations-construction materials, old appliances, electrical supplies, plumbing supplies, tools, lighting, building materials and many other things too numerous to mention.  This keeps stuff out of landfills and gives it a second life when it leaves in the hands of a customer to be used in a new project.

But the construction junction is also a mecca for creative types.  I found some embossed tiles there that make perfect polymer clay texture sheets.  I got some brass pipe and metal parts that I will recycle into jewelry.   If I wanted one of the vintage stoves that seem to be all the rage these days,  I could pick one up at the Construction Junction and restore it to working order. 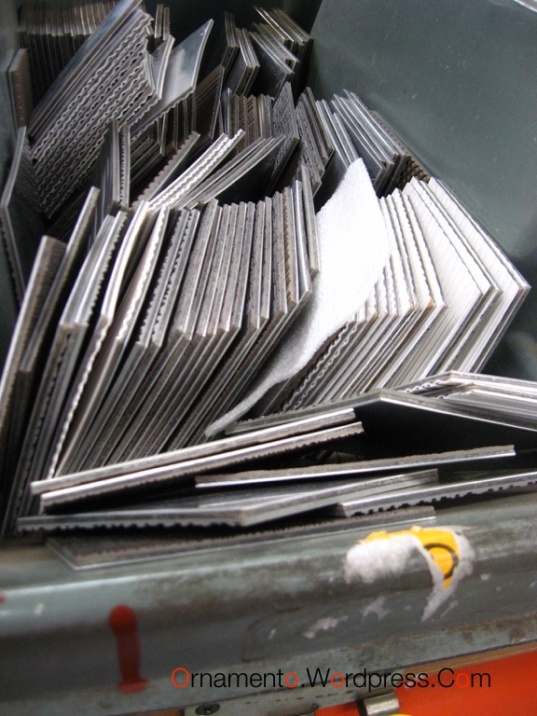 The place is HUGE, the staff is friendly and there is plenty of parking.  Check it out if you find yourself in Pittsburgh. 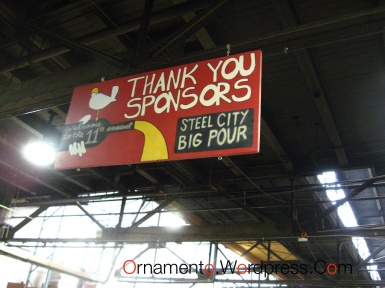 We drove across the state last week to attend the opening of Into The Forest.  There was so much to look at!  And the opening was packed.  I’m glad I was able to go back to the gallery the next day and get another look.  I was constantly seeing things I hadn’t noticed the night before.  What a treat!  But I’m afraid I have run out of words about now so here are some pictures from Into The Forest.

You can  buy the exhibition catalog which contains a picture of every contribution along with the name  and locale of the artists.  For more information, press  here.   But the pictures and the catalog are not a substitute for walking into the forest yourself.  The exhibit runs until December 3 and is worth a trip to Pittsburgh.

My Father served in the 100th Bomb Group during the Second World War and was stationed at an airfield in Thorpe Abbotts, England.   After he completed 35 missions, the Army shipped him to a hospital where he learned how to talk again.   Then he started his life over.

He never wanted to return to Thorpe Abbotts and I can’t say I blame him. But I had always wanted to visit the place that must have changed him so much.  I finally got to visit Thorpe Abbotts on my last trip to England.  And I felt closer to him than I have ever been.  Strange that it took a visit to such a far away place to feel this way.  I made the  journey for me, but I had returned for him.

I caught a train from London at Liverpool Street Station on the Norfolk line and traveled to Diss, the station closest to Thorpe Abbotts.  A few years ago, I found a stub a train ticket stub for a London to Diss journey in my Father’s old wallet among some family papers.  He had taken the same route from Liverpool Street Station when he returned to Thorpe Abbotts after a leave in London in March of 1944.

Thorpe Abbotts is a country village surrounded by millions of acres of farmland near the east coast of England.  A perfect place for an airbase and there were many  of them up and down the English coast.  Before World War Two, Thorpe Abbots had a population of about 40.  When the airbase opened,  the Americans station there increased the population  to 3,500.

Now it is a quiet village again and the rich and valuable farmland  has been given back to the farmers to grow crops.

Here are some pictures: 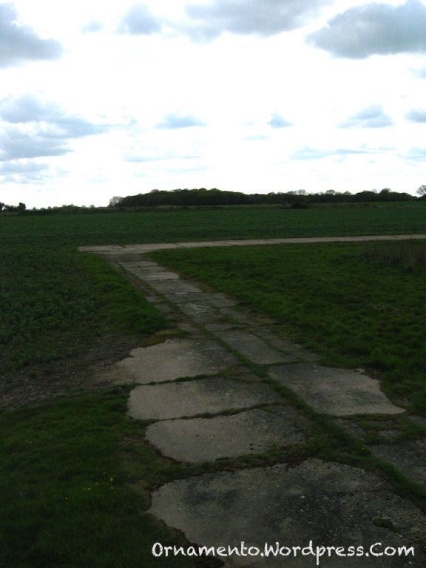 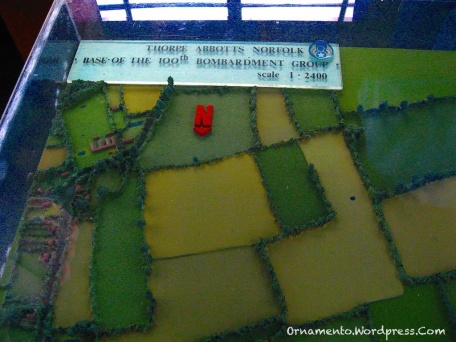 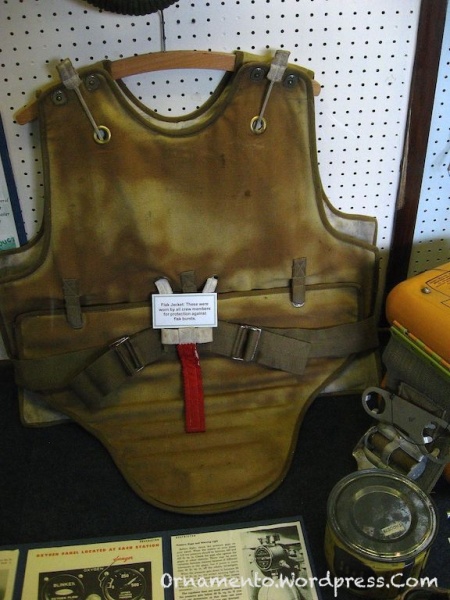 The tall structure on the left side of the road is All Saint’s Church.  Some members of the 100th Bomb Group were married there.  Many more had funeral services there.

If you are in the area, try to visit Thorpe Abbotts and the 100th Bomb Group Memorial Museum,  started in 1977 by the locals.

Here are some of the sights we took in on our wanderings around Dublin recently.

The Interior of the GPO as it appears today.  It was virtually destroyed during the Easter uprising and restored in the 1920s.  The GPO now houses the GPO Witness History Museum, a chronicle of the 1916 uprising.   You should not visit Dublin without seeing this remarkable exhibit. 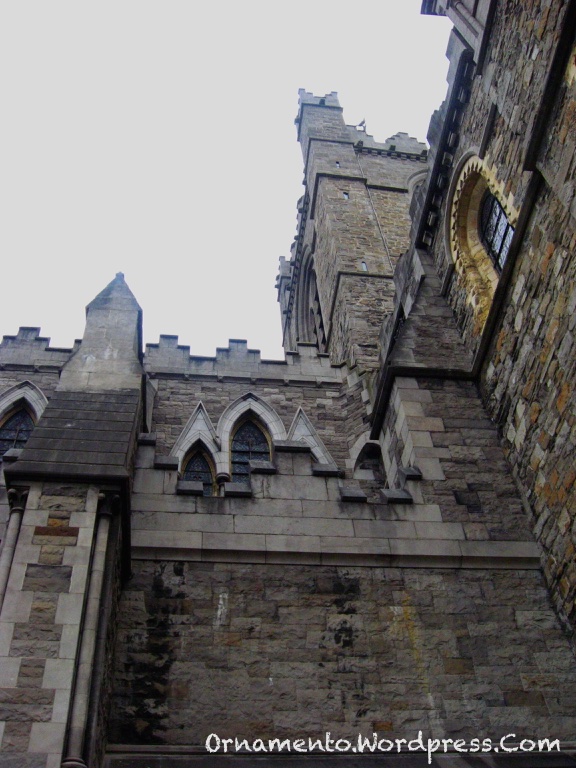 Looks like the Leprechauns have gone and started their own museum.   (We skipped this one.)

The Old Library at Trinity College

This has been a good week for spinning my wheels, losing things and taking forever to get things done.  I will not bore you with the sordid details.

I had the good fortune to visit Edinburgh, Scotland recently and took hundreds and hundreds of pictures.  I decided to skip the scenic travel pictures and share the more unconventional ones  ones with you.

My husband, apparently encountering a clown on his way to  a circus dress rehearsal. 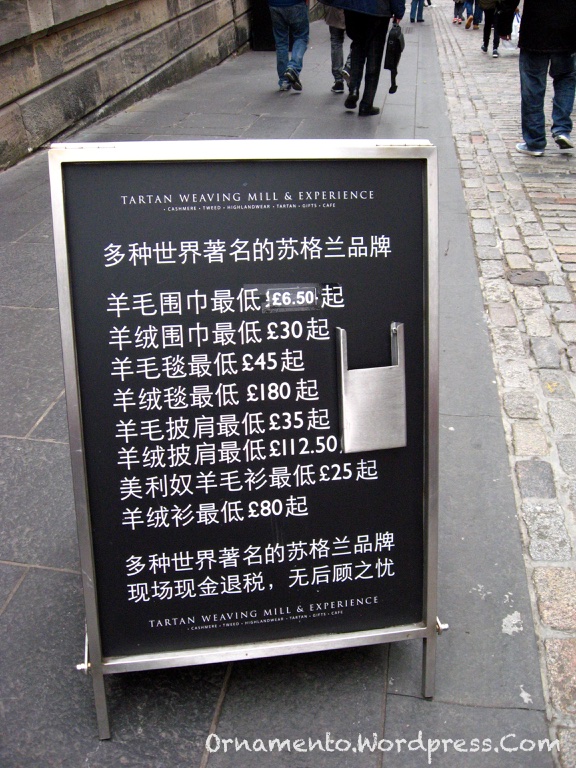 It’s no stranger than an English sign in China, but the juxtaposition of “Tartan Weaving Mill”  caught my eye.

What us this world welcoming us into?

We can meet at the pub at The World’s End

And if the Zombies find us.

We can escape to Edinburgh Castle

Another Clayathon has come and gone.  There was a record attendance of 80+ this year from all over the US and a delightful contingent of clayers from Canada.  Clay retreats really are a wonderful place to make friends and to rekindle old friendships.

Lindly Haunani, this year’s guest artist, shared her color expertise with six hours of presentations stretched over three days.  In  between Lindly’s demos, the attendees shared their knowledge of techniques ranging from Kumihimo, wire working and wet felting as well as basic to advanced polymer demos.

There is a lot I am not mentioning but I am still recovering from the experience. When I got home, I went straight to bed and got up 14 hours later.

Here are some pictures. 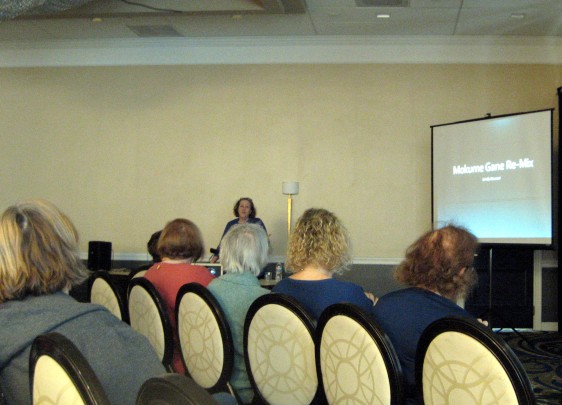 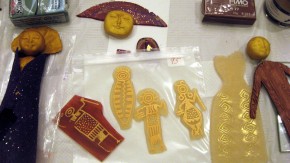 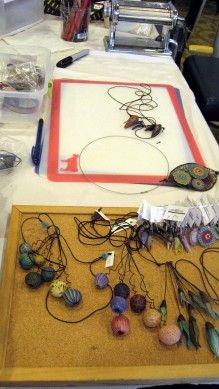 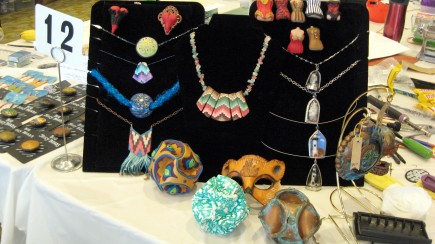 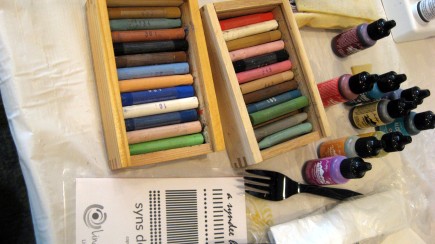