One aspect of creativity is combining ideas.   Finding new ways to use and combine materials is another one.   I have been interested in Viking Knit for some time and between experimenting with alternative ways to do it and alternative tools to make it,  I came up with some new ideas to give single weave Viking Knit a new look.

I found this beautiful fabric on a discarded window treatment. This is what it looked like after I washed and dried it. The blued and coppery hues reminded me of the copper wire I use in Viking Knit. And I love the contrasting look you get with using ribbon with stones or metal. 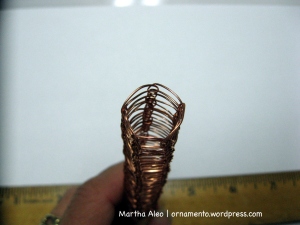 Why not thread some of this luminous looking fabric through the Viking Knit?

Ok, the first thing I learned is that you do not, I repeat do not pull the chain through the draw plate before you thread the fabric through- do it before.  Just make sure the  fabric or ribbon is long enough to fill the length of the knit after its final pull through the draw plate.     The fabric does not make the chain any thicker or harder to pull.

So, what can you do with your ribbon filled Viking Knit?  Here are some ideas.  Run with them. 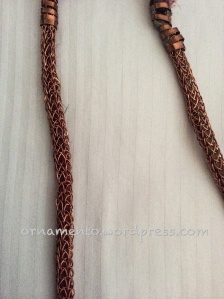 This is a necklace that I’ve finished with bands of flat copper wire run through a rolling mill. 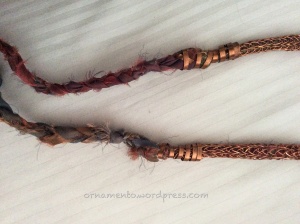 I braided the ends of the wire.  The ends are purposefully left raw and unfinished for a funky look which might not be for you. 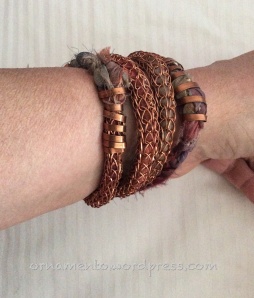 These pictures are of a Viking Knit that’s around 20 inches long (excluding fabric ties) that I’ve made into a multi-strand bracelet for a  funky bohemian look.

You can try different fabrics, add beads, finish the ends however you want- the sky’s the limit.  Make something that looks different from what everyone else is doing! Play and have fun. 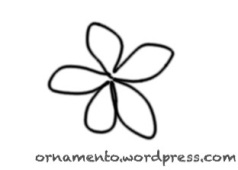 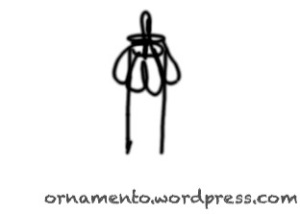 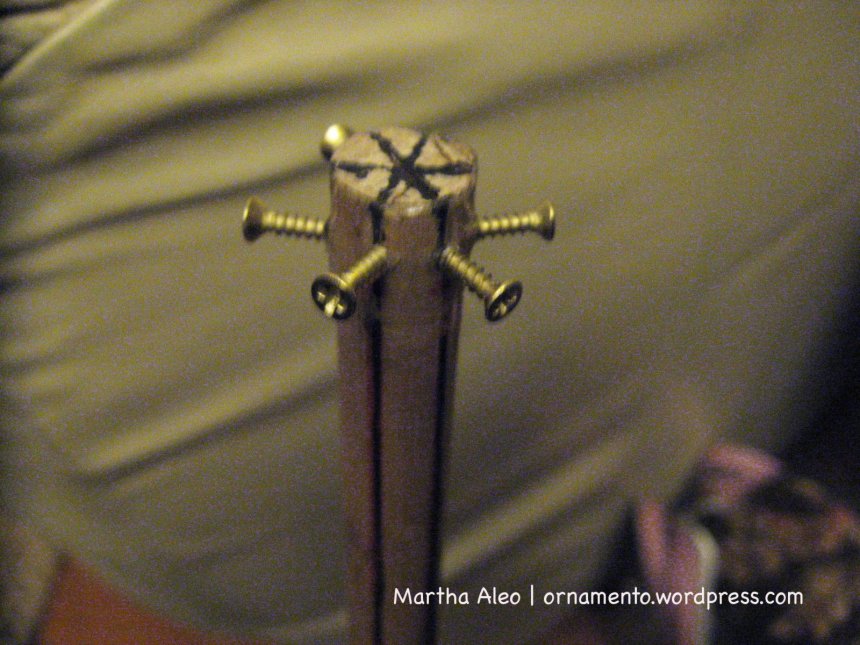 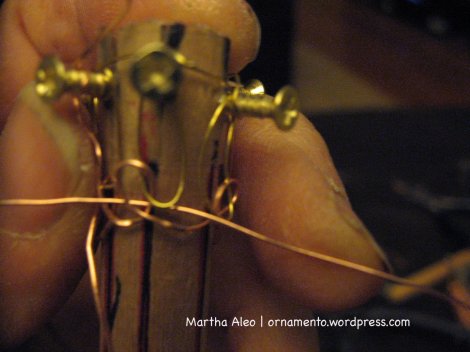 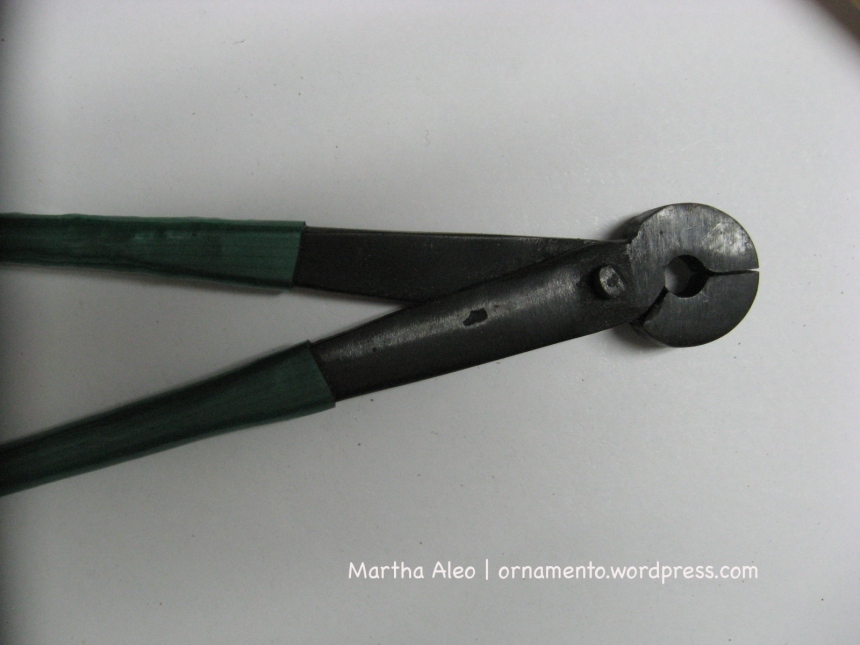 Do Overs.    Don’t you wish you had the chance to do some things again because they didn’t turn out  the way you wanted the first time?  Or, maybe you thought of a better way to do something, but it was too late you you couldn’t get motivated to begin again.   Do you give up or try again?

Contrary to popular belief, even talented people don’t usually nail  a technique the first time they try it.   In his book  Outliers, Malcolm Gladwell says you have to work at a technique for 10,000 hours to master it.  I normally have to try something many times (except marriage thank the powers that be) before  I get something that comes even close  to what I had in mind.  Sometimes I never do.  Sometimes I  take a detour, have a happy accident, and end up in a new place all together.  Now that I think of it, that’s how I ended up getting married!

Do not be afraid of Do Overs!  Do overs are a great way to learn.  Do overs do not make you a failure.   Here’s an example: Look at the Viking Knit  necklace below.  It’s a triple weave made from 24 gauge copper wire.  I wanted to make a finding that would work as a focal piece and clasp.   First, I made the one  you see on the left.    I liked it for about a minute, then it began to aggravate me.  I thought the scale was right, but it was boring.   It was difficult to open and close the necklace.  The metal (14 gauge wire) was dinged and hammering it flat didn’t add anything to the design.

Compare the finding on the left with the one on the right.

I used the same gauge wire and the same length for the second finding.  This time, I fabricated hooks with balled ends and  loops.  I suspended the hooks from the  loops coming out of the end caps.  This gave me the option of making  a  focal piece or clasp I could attach to the hooks, and it gave me the option of  switching out the item if I wanted a new look.

The new focal piece/clasp is also a spiral, but I balled both ends this time.  This was a design decision instead of the design indecision I  made on the first piece where I cut the spiral ends, filed then and just left them.   You need a hot torch to ball copper wire this thick,  so I used my EZ Torch.    Then I made copper jump rings and soldered them to the spiral.  The necklace is now easy to take on and off and is more comfortable to wear because the hooks and jump rings make the assembly more flexible.  I don’t like to know that I am wearing jewelry and I don’t want to spend a lot of time putting it on and taking it off.  But I don’t want to lose it, either.  The hooks and the weight of the necklace components work together to hold the necklace on securely.

Press here  to see another piece I  did over before I was happy with the results.  And here are two metal lentil beads I made and wore suspended from chains.  One day I decided to try them as pendants on bead strands.  I think the whole look is more opulent.  If you’re not happy with one of your projects, don’t be afraid to do it over! 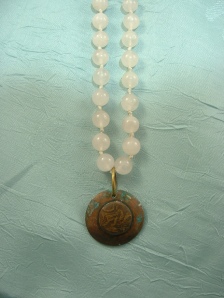