The next person I talked to was polymer artist  Janet Pitcher (Petal Pushers) from San Diego. I am always interested to learn how polymer artists discovered the medium, and  Jane’s story is not unusual.  She was 32 and trolling the aisles of Michaels with her 8-year-old son looking for a craft project.  She saw the polymer, tried it and was hooked.  Although she spent years in sales, she was a creative at heart and had a successful business  designing and making costumes. She was also selling her polymer work at retail shows  before she switched to wholesale shows about 10 years ago.

She is a consummate salesperson and her passion for polymer was evident.  Janet’s booth was crowded with buyers when I entered and they all left orders with her.

I asked Janet whether she thought that polymer was a hard sell.  “It can be,” she admitted, ” but polymer is no less valuable than regular clay, cloth, glass, fabric, or a host of other materials.  The value is what the artist brings to the medium, same as any other medium.”   I listened as Janet told her customers  that polymer is “durable, light, and color fast.”  She stressed that she used “high-quality components: Swarovski crystals, niobium wire, and high-quality brass and metal parts” and let them know that she did all the hand finishing herself.   Her lariats are composed of polymer focals  strung on silk ribbon.  Her earrings have a corresponding lariats and can be worn as a set.  I didn’t see any bracelets.

How to you explain the caning process to people who know nothing about polymer? I’ve seen many a polymer artist (myself included) struggle to do this or,  worse yet, have to explain it over and over all day long.   Jane’s solution was ingenious.    She had a speeded up video of the caning process playing on an iPad to one side of her display.   See the picture below.

I had originally planned to post this article (on the changes in the market for hand crafted items) before the coronavirus swooped in and upended everything.

The coronavirus has already unleashed significant changes in our lives.  One more thing it is destined to change, although we don’t know how yet,  is the craft market.  Some entities are trying to address this right now.    American Handcrafted is compiling information for Artists and Makers.    Square is helping local businesses to support each other. And some folks on Etsy are selling washable face masks and face mask making tutorials (although there are many sites on the Internet with free directions.  I put some links on a post a couple of weeks ago. More are being added all the time.)    But everything is up in the air right now and no one knows how things will shake out for commerce in general much less the craft market.  With that in mind, here is what I learned from two artist/business people at the American Handcrafted wholesale show in February, before things changed yet again.

Before 2005,  I sold my work (mostly jewelry) in several galleries and stores, and did a few shows every year. Craft sales were not my main source of income but I did well enough to keep at it.  Family obligations put a stop to that and by the time my life settled down again, the 2008 Recession had caused major changes in the market.   I have done a  little selling since then, but remain mostly ambivalent when it comes to marketing and selling my work.

While I am not interested in wholesaling and  rarely do direct sales, I am  interested in the experience of Artists who sell their work in the retail and wholesale arenas.     I was lucky enough to score a ticket to the American Handcrafted (formerly American Craft Retailers Expo) show in Philadelphia in February, and managed to talk to a few of the vendor/artists who exhibited at the how.   Here are two of the most interesting interviews.

Stickball Studio’s Diana Taylor (Ficklesticks Fiber Jewelry and Fiber Art from Little Rock Arkansas),  has been selling her hand made creations for more than 30 years.  She has seen  craft shows change greatly during that time,  In the 1980’s, she observed, the show aisles would be so crowded with people that you could not see to the end.  And crafting was very popular, getting some of its momentum from the handmade movement of the 1960s and 1970s.  There were a lot of stores and galleries looking for products to sell to their mostly Baby Boomer customers.  Business was good.  It took a downturn with the recession in the 1970’s but improved in the 1980’s. The 2008 Recession cut back business and it has never fully recovered,

Today’s typical craft show customer is older.  Stores and gallery owners are leaving the business or retiring.  There are younger makers and sellers, but things are moving on line.  Ficklesticks has adapted  to the changes in the market and is still thriving.  They maintain  an online site in addition to their wholesale business.

One major change Diana that mentioned she made in her business,  is that her sales reps are bypassing the galleries and gift shops and marketing to the fashion industry.    (I note here that two other artists who have successfully marketed to the fashion industry are Veruschka Stevens (Veru Designs) and Susan Lenart Kazmer.) 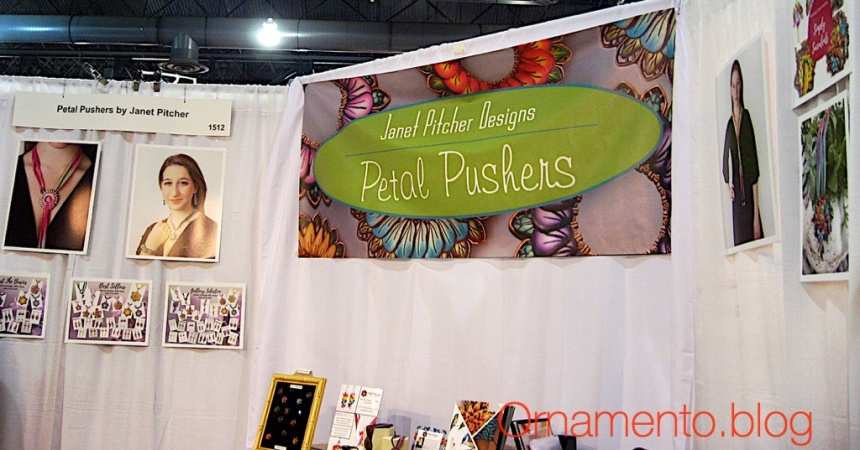 Janet’s observations on marketing were equally interesting.   She said that people were increasingly less likely to buy products like hers from galleries and more likely to by them as a way to cement an experience, making tourist souvenir shops and museum shops good outlets for handcrafted items.

Something to think about.  Check out Janet’s web site here.

I close with a link to a funny song that you have probably already heard unless you are hiding under a rock.  Enjoy.  And stay safe.